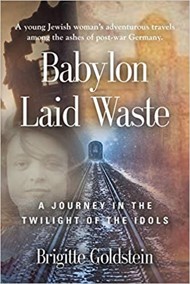 Alerted by a letter from Berlin that her grandmother may be alive in a Jewish hospice there, Misia Safran, a former refugee living in New York, is determined to follow the lead and return to her native Germany. However, it is 1946 and the defeated Reich, under Allied control, is off-limits to civilian travel in or out. With the help of a people-smuggling ring, Misia manages to breach the fortress and enter with forged German identity papers under an assumed name. As her journey takes her ever deeper into the devastated enemy territory, she encounters an array of colorful, frequently shady characters ranging from victorious Americans, unrepentant Nazis, ordinary civilians, Jewish survivors, and washed-up Wagnerian opera stars; all of whom have an intriguing personal story to tell and private agenda to pursue.

When Misia runs afoul of the US military authorities, she meets her nemesis in the person of Major Emil Zweig. Since she lacks the crucial “Persilschein”—a denazification certificate—he sends her to a prison for female Nazi criminals. At this nadir of her ill-starred attempt to reach Berlin, a savior appears in the person of an enigmatic Jewish survivor who calls himself Frantiçek Kafka. Impelled by the romantic attraction sprouting between them, Misia embarks with him on a whirlwind search for a pair of Nazis. In the course of a rollercoaster ride of many unforeseen emotional ups and downs, she becomes a major player of a drama in which nothing and no one is what appearances suggest or pretend reality to be.