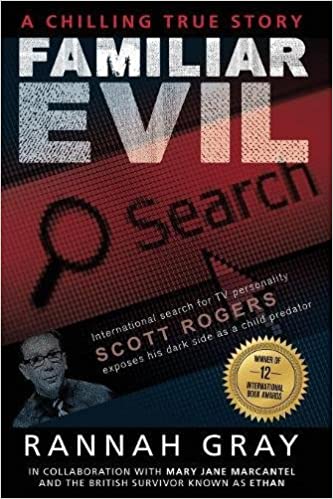 Familiar Evil goes inside an investigation that sent shockwaves from Louisiana to London. When a young British businessman coincidentally connects with an American public relations consultant, the two end up working with authorities on an international criminal case that builds to an explosive conclusion.
—
With raw honesty and unparalleled access, Familiar Evil tells the story of one man’s international search for a child predator–how perseverance, courage, and the enduring belief in good over evil prove the power of one.

Twenty years before this story begins, a hung jury in England allowed Scott Rogers, principal at the performing arts academy, to avoid prison on charges of sexual assault against a young student and quietly slip out of the country. Ethan, a successful businessman, husband, father, and former academy student, always knew the jury got it wrong. He knew his classmates had told the truth, and he knew Rogers would continue to abuse until somebody stopped him.

For 13 years, Ethan searched for Rogers. His efforts finally paid off when he found Rogers’ name in an online search, referenced in the letter to the editor of a daily newspaper in Louisiana. He took a bold step. He emailed its author, public relations consultant Rannah Gray. This is their story.

For the next 365 days, Ethan and Rannah worked to expose the truth, becoming confidential informant to a federal investigation that uncovered how Rogers had used deceit and fraud to gain U.S. citizenship. With colorful criminal defense attorney Nathan Fisher and gutsy paralegal Mary Jane Marcantel, the foursome discovered that Rogers had brought several teenagers to the U.S., exploiting some as sex slaves. Claiming friendships with a powerful federal judge, The head of State Police, and the local Sheriff, Rogers became increasingly brazen. As law enforcement agencies in two countries were working to stop him, he was surreptitiously moving to adopt more young boys into his home from state custody.

Familiar Evil reveals never-before-told details of the hunt for Rogers. Along the way, licensed clinical social worker Leslie Todd provides chilling insight into the minds of sexual predators who seek power and control over their victims.

This is a story that sent shockwaves across two continents– the story that can be told only by those inside the investigation and the heroic British survivors of Scott Rogers’ abuse.