I Saw What I Saw: A Harmony Neighborhood Mystery by Tony Garritano 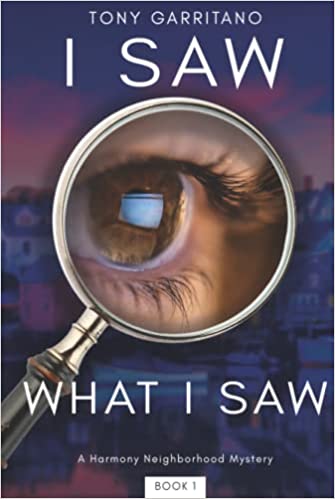 Crime blogger, Sheila Sammartino, witnesses a murder, but the police disagree. Sheila knows better, and to prove it she will solve this herself, not just write about it.

The small town of Harmony’s number one Internet sensation is crime reporter turned blogger, Sheila Sammartino. Inquisitive, self-conscious and often clumsy in an oddly endearing way, everything is going great for Sheila until she stumbles into a murder mystery, and not as a reporter!

She witnesses a newcomer to the neighborhood, Arthur Jones, murdered in the alley next to Harry’s Bagel Shop. The police are quick to call it a mugging gone wrong, but Sheila saw what she saw. With the help of her outspoken former college roommate and her classically handsome new next-door neighbor, this trio take it upon themselves to get all the answers the police refuse to look for. Who was Arthur Jones after all? And who would want to kill him?