Princess of the Blood: A Tapestry of Love and War in Sixteenth-Century France by Brigitte Goldstein 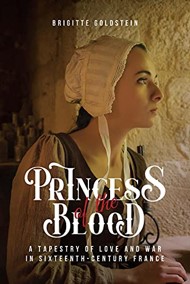 The year is 1588. Religious strife between Catholics and Huguenots has ravaged the Kingdom of France for decades. Spring maneuvers take Count Philippe de Treffort, captain in the Catholic League, to remote village where he become enthralled with Sandrine, daughter of the local innkeeper. From the moment he lays eyes on this beautiful, headstrong child, he feels irresistibly drawn to this beautiful young woman so different from the peasants among whom she lives. In a moment alone, she confesses to a similar attraction and dreams he is the liberator who will take her away from her miserable existence. His promise to do, however, remains unfulfilled as the fortunes of war engulfs their lives and fate conspires to keep them apart. Princess of the Blood centers on the epic struggle of a young woman to overcome the obstacles laid in her way by superstition, religious fanaticism, and the vicissitudes of war in order to find her identity and personal freedom to be united with the man she loves.
Back to Award winners