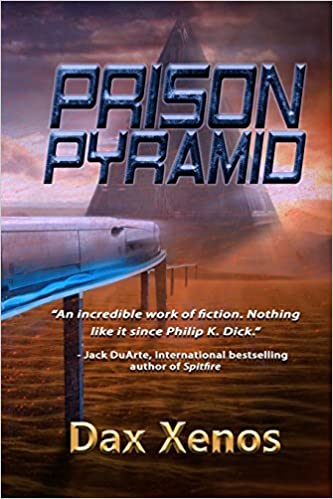 “An incredible work of fiction. Nothing like it since Phillip K. Dick.” — Jack DuArte, international best-selling author of Spitfire

Prison Pyramid: (356 pages) is a high-concept techno-thriller set in a futuristic prison in the vein of Philip K. Dick, Michael Crichton, Thomas Harris, and Jules Verne. When conspiracy theorist Axel Storm is wrongly convicted, he’s sent to The Pyramid – a maximum-security correctional facility that stands a mile high and a mile across – home to two million felons. At first, the prison seems like a self-sustaining utopia, with subterranean fish farms, aquaculture and waste treatment levels. Recidivism rates are surprisingly low. Are inmates really being rehabilitated? Storm soon discovers the mother of all conspiracies: The Pyramid is repurposing convicts to serve the Quackenbush Corporation, a world leader in corporate and industrial security. The trouble is, Storm’s notoriety makes him both a prize catch and a dangerous whistle-blower. Can he survive The Pyramid long enough to reveal its secrets to the world?