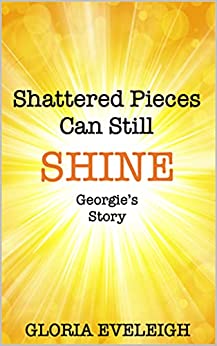 From the award-winning author of ‘One Small Word – Surviving childhood abuse’ and ‘No – Sequel to One Small Word’ comes Gloria Eveleigh’s latest fiction novel, ‘Shattered Pieces can Still Shine – Georgie’s story’. This story loosely based on a real-life story, is about Georgie, a child born to a single mother just after WW2 in a small village in Cumberland. After an initially happy first few years of childhood during which Georgie dreams of becoming a dancer, she finds herself the victim of sexual and psychological abuse by her stepfather, and then neglect and rejection by both her mother and her absent father. Eventually Georgie runs away to London where, after a short period of rough-sleeping, life seems to become more positive for a while, and she is able to kick start her dancing career. But things go badly wrong, and Georgie finds herself imprisoned into a life she did not choose, with little chance of escaping. She had rarely prayed to God, but it seemed He was watching over her…

Gloria Eveleigh is a survivor of familial childhood abuse and grew up determined to turn her life around from negative to positive, so that she could help others whose experiences had been similar to her. Although she started her career as a research scientist, she then went on to build a new career in social care, working and then managing a local authority day care centre for older people, gaining her qualification as a social worker, and latterly running her own safeguarding consultancy. She didn’t start writing until she retired, and then she began by writing and illustrating forty-two phonics-focused picture storybooks for small children – providing them with a fun way to learn to read.

Gloria’s wish to continue to help survivors of childhood abuse, turned her to writing her memoir and appointing herself as a champion for victims and survivors, a role that she fulfils through her intense marketing on social media, through helping other survivors to write their stories, and through her own writing of abuse focused books.

There is still an invisible wall surrounding child abuse that stigmatises victims and prevents them disclosing, but that also, in effect, protects the perpetrators. While this is the case, Gloria will continue to write her books and post on social media until things change. Her motto is: Stop the abuser – stop the abuse.