Storykeeper by Daniel A. Smith 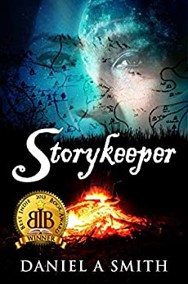 “A stunning novel and a joy to read” Helen Hollick, Managing Editor – Historical Novel Society (Editor’s Choice) “Smith writes fluidly, and the society he depicts is intriguingly complex.” – Kirkus Reviews“Steeped in immediacy and vivid detail.” D. Donovan, Senior Reviewer – Midwest Book ReviewThe first recorded Europeans to cross the Mississippi River reached the western shore on June 18, 1541. Hernando De Soto and his army of three hundred and fifty conquistadors spent the next year and a half conquering the nations in the fertile flood plains of eastern Arkansas.Three surviving sixteenth-century journals written during the expedition detailed a complex array of twelve different nations. Each had separate beliefs, languages, and interconnected villages with capital towns comparable in size to European cities of the time. Through these densely populated sites, the Spanish carried a host of deadly old-world diseases, a powerful new religion, and war.No other Europeans ventured into this land until French explorers arrived one hundred and thirty years later. They found nothing of the people or the towns that the Spanish had so vividly described. For those lost nations, the only hope that their stories, their last remaining essence will ever be heard again lies with one unlikely Storykeeper.~~~Editorial Reviews of Storykeeper, winner of Best Indie Book Award 2013“‘A man without a story is one without a past,’ Smith writes, ‘and a man without a past is one without wisdom.’ By the time readers have wandered freely through the strange realm of the Storykeeper, they may well find those words more prophetic, and more powerful.” – Kirkus Reviews“Storykeeper is a complex read . . . With both perspective and time in flux, readers are carried along on a historical and cultural journey that, while compelling, requires attention to detail: not for those seeking light entertainment, it’s a saga that demands – and deserves – careful reading and contemplation.” D. Donovan, Senior Reviewer – Midwest Book Review“I was not only entertained by this book, but educated about a period of history of which I knew nothing. I loved the chapter structure which has a rhythm of its own, all wrapped in an attractive and appropriate cover. I have no hesitation in recommending this book no matter where your historical interest may lie. I give it 5 stars!” Helen Hollick, Managing Editor – Historical Novel Society (Editor’s Choice)“Smith has created a wealth of history and culture that will make you weep. Creating words and phrases with a poetic sense, building a feel for Native American culture that feels so genuine and, yet, is eminently readable.” Kathy Davie – Books, Movies, Reviews!“I love this story, and I applaud Daniel A. Smith on his diligent research. Smith writes some strong characters in this gripping story. Every human emotion is engaged, and at times I felt like I was right there with Manaha and the tribes who fought against DeSoto. Superbly done. I’m sure I will be reading this book again.” SK – The Jelly Bomb Review“The book’s images, enhanced by objective historical writing are portals into the distant past, sometimes humorous, often heartbreaking, but always illuminating.” Fred Petrucelli – Log Cabin
Back to Award winners