The Last Crystal by Frances Schoonmaker 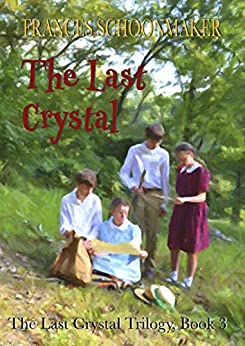 When they board the L.A. bound Santa Fe Chief in Kansas City, the Harrison kids have never heard of the Last Crystal or the magic surrounding it. Worried about their father, who has been injured in World War II, they dread a summer with their boring, old Uncle James. But before the train is half way to L.A., J.D., Mary Carol, Robert, and Grace have crossed paths with a Nazi spy and one of the four has been kidnapped. Then, without warning, they find themselves off the train, drawn into a quest for the Crystal. To get home again, they must cross two thousand miles of wilderness and find the Crystal, with nothing to guide them but their wits, each other, and an old map that only the youngest can read.
Back to Award winners