“Trust and Confidence”: The 1998 Battle between the Secret Service and Ken Starr by Jim Lichtman 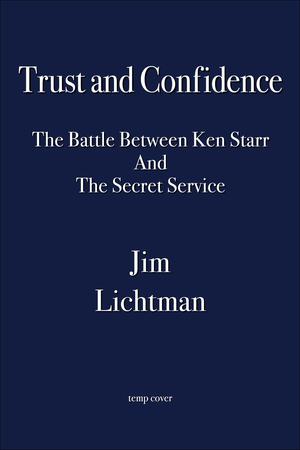 “Trust and Confidence” is about the 1998 battle between the Secret Service and independent counsel Ken Starr. It’s about one of the most contentious political battles of the last 23 years. It’s about one man standing on principle and another who believed the end justified the means.

In 1998, for the first time in our nation’s history, the director of the United States Secret Service was asked to testify against a sitting president. Independent Counsel Kenneth W. Starr wanted to question Director Merletti, as well as agents on the president’s protective detail, about President Clinton’s relationship with White House intern Monica Lewinsky. Based on alleged inside information, Starr issued a motion to compel agents on the president’s detail to testify as to what they may have seen or heard regarding Clinton’s liaisons with Lewinsky.

Merletti argued that if agents were permitted to testify about anything other than criminal acts, it would compromise the Trust and Confidence tenet critical to the protective mission of the Secret Service, and thus jeopardize the safety of the presidency and the country. With the support of all living former directors, the upper echelon of the Department of Justice, and former president George H.W. Bush, Merletti battled the independent counsel for six months, taking his case all the way to the Supreme Court.

“Lew was a trusted member of the Secret Service who believed in the values of duty, honor, courage, and commitment. Trust and Confidence is the story of how Lew defended those values from those who sought to undermine what he would never surrender – his integrity.” – Leon E. Panetta, Former Chief of Staff, CIA director, and secretary of Defense

“A well-researched, enthralling history of the fight between Kenneth Starr and the Secret Service. Lichtman’s story is a gripping political drama.” – Kirkus Reviews https://www.kirkusreviews.com/author/jim-lichtman/

With interviews and previously unreleased documents from the Independent Counsel files in the National Archives, “Trust and Confidence” is a story about Starr’s investigation that no one has heard before.

When trust and confidence in institutions and ourselves have all but vanished, Merletti’s story of integrity reminds us of who we were and who we can be again.