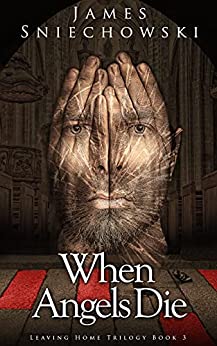 All that in When Angels Die, third book in James Sniechowski’s Leaving Home Trilogy. His lead character, Jim, finds himself going from a prestigious New York City acting school to early success in a regional theater in St Louis. With each new role, and rave reviews from professional theater reviewers, the remnants of his Polish peasant Catholic upbringing threaten to unravel his career and his soul.

A deeply personal rivalry ensues—one part pulling him toward the world of success and a life of deeply satisfying self-expression and the other demanding abject submission to a culture that views the world as treacherous, seductive, and sinful.

Meanwhile, Jim is blessed by the grace and wisdom of the older Southern-born woman who is all too pleased to have young Jim as her tenant. At the same time, he discovers real love for the first time with a young, intelligent woman who accepts him for all that he is. And it is through the challenges evoked by love from these two women that Jim discovers the depth of his true identity and eventual release from his early roots. When Angels Die, with its philosophic and poetic overtones, is storytelling at its very best.