When Lions Roar by Karen Gruber 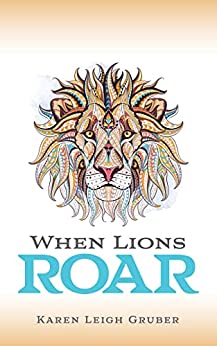 TWO WOMEN FROM DIFFERENT LANDS, EACH STRUGGLING TO SURVIVE: A CHILD’S MYSTERIOUS DISAPPEARANCE WILL ALTER BOTH THEIR LIVES FOREVER…

Maggie has become unrecognizable to herself, succumbing to the predictability of being a mother and wife. Every day she reminds her daughter to brush her teeth and has the same conversation with her husband about what’s for dinner. Maggie struggles to cope with the disenchantment of the monotonous tedium that has become her life. Despite her boredom, when her husband David is called on assignment to South Africa, Maggie resents having to rearrange her life just because David has decided they all need to traipse halfway across the globe.

While on safari, Maggie awakens one morning to a mother’s worst nightmare; their daughter Hannah has gone missing. Just when things can’t get any worse, Maggie is confronted with the harsh truth of her emotionally abusive marriage and what she has allowed her life to become.

When Lions Roar is set against the backdrop of the exotic and intriguing landscape of South Africa, when the country is reeling from the aftershocks of apartheid. Will Maggie find the strength and courage to abandon the fragile ties of her marriage and confront her self-destruction in time to save the life of her daughter?